We all know, on Jan. 29, 2017, a lone gunman in Quebec City and opened fire on dozens of Canadian Muslims while they were praying in a local masjid, six innocent persons had been tragically killed, and 19 more injured. We Canadian citizens and Canadian Muslims are glad to note that, after three years, the government of Canada, designated January 29th as a National Day of Remembrance and Action on Islamophobia and other forms of religious discrimination.

We would consider 90% of Canadians are tolerant and accept Muslims and Islamic practices and understand Canadian Muslims are contributing law abiding citizens.

Remaining 10% are having some form of racism but this is in every society.

These 10% people openly or subtly express hatred, discrimination against Muslims or other religions or ethnic minorities.

We are also happy to note that recently Canadian Federal government also declared the Proud Boys, white supremacy groups, a total of 13 groups as terrorists’ groups.

We thank our PM Trudeau and the MPs for two positive actions for religious freedom where minorities can freely live without fear and hatred or racism.

We, each and every Muslim, can also do some positive and proactive actions in our daily life in our workplace, in our neighborhood and in social settings.

We can exchange gifts, be active during Ramadan, Eid sacrifice and even work during Christmas and Easter, with mainstream society.

Let us keep our Islamic identity and be active with Canadian mosaic and do some simple visible activities to develop peace and harmony in the community. 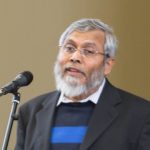